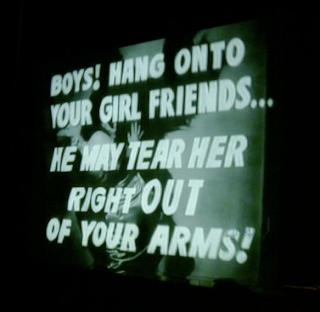 The first movie that I remember being terrified by was Jaws.   Everyone was scared of sharks the summer Jaws came out – even the poster was eerie – but I was terrified at the molecular level.  I blame my parents and the Kingston Drive-In.

Of course, it doesn’t help that we live in Massachusetts, not far from where the movie was set, where I was sure there was a family of Great Whites swimming around looking to seek revenge on Chief Brody.  (Did you see Jaws 2?  I wasn’t far off.)  It doesn’t help that I saw the movie from the back of my parents’ ’68 Mustang (where I was supposed to have fallen asleep after the Jungle Book), peeking over the seats and ducking back down every time the scary music started up again and my mother yelled “Shark!”  Even the grey metal speakers that clipped to the car window terrified me that night, their grills like shark mouths piping the scary John Williams theme.  I tried to convince my parents that we didn’t need the speakers and could hear the sound just fine from other people’s cars.

My most vivid memory of the movie is not even of the shark itself, but of a corner of a kitchen table – the scene where Chief Brody and Hooper drink wine and talk shark, which I watched with both eyes open because it took place solidly on dry land.  Still, sometimes it’s what you don’t see that’s most terrifying.  Hearing the music from the silver-grey squawking speaker perched inside the car window, knowing the shark was coming to eat someone (heck, it could have been me!), my mother telling me when to duck back down behind the seats – all of these added up to the most terrifying movie experience I ever had.  Did I mention that I was only five years old?  As far as I knew, that shark could have been in the parking lot, circling our car, just waiting to swallow the entire Mustang whole.

So, I don’t think I was being unreasonable to protest learning to swim that summer.  True, a child who lives near the water should know how to swim.  But perhaps it was not my parents’ best idea to sign me up for swimming lessons IN THE OCEAN.  In open water.  Where I was sure sharks would eat me.  The lessons were held at Priscilla Beach, and they were never on a sunny day.  It was always overcast and spooky, and because it was early in the morning, the fog had never quite burned off.  Our teacher was non-descript other than her obvious fear of sharks.  She cloaked her fear in meanness, but I could tell she was scanning the horizon for telltale signs of dorsal fins.  She held a clipboard with our names on it clutched tightly to her chest, and she never went deeper into the water than mid-shin.  In fact, not only did she insist on always being the one closest to dry land, shooing the rest of us further out into the deep – she finally gave up on swimwear altogether and just wore shorts and a sweatshirt to the lessons.  Because she refused to go into the water, there wasn’t that much she could teach us.  Earning our end-of-course badge was based entirely on our mastery of one skill: ironically, the dead man’s float.

I can therefore credit Steven Spielberg with two things in my life:  my fear of swimming in open water, and my love of drive-in movies.  Despite the terror, watching Jaws at the drive-in was an experience beyond sitting in safety inside a theater.  I wore my pajamas at the rusty playground and got salty Styrofoam popcorn at the snack bar.  Instead of rows of people, the boisterous snack-filled cars held mini-parties – tiny microcosms of society that stopped to cross paths for a couple hours’ entertainment.

We (my husband and I) have actually tried to recreate this scenario in our own back yard, in the most literal of ways.  We don’t have a rusty playground, and we don’t let people drive on the grass, but on every nice weekend night, we hang a giant movie screen on the back of our house for “Drive-in Movie Night”.  It started with a 16mm projector, a few reels and a few friends, and has grown into a little weekend carnival of its own.  (Investing in a carnival-style popcorn popper certainly helped.)  Last year we added a preview reel to our repertoire, featuring animated Drive-In ads from the 50s and 60s in which shiny dancing hot dogs implore guests to buy snacks before the show.   Sometimes we’ll plan a movie night with invitations and 80+ people, but most often it’s impromptu –say, a last-minute showing of “The Fog” on a foggy night.  The kids huddle in their blankets, sticky with cotton candy, while the grown-ups sit back with a few beers.  Without fail, though, every July 3rd we show Jaws… and on July 4th we’re all afraid to go back in the water.