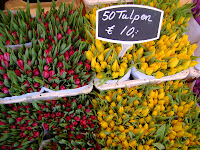 Amsterdam, to put it bluntly, is not like anyplace around here.  (No pun intended on the word “blunt”, although there seemed to be more pot-friendly “coffee shops” than non-pot-vending “coffee houses.”)  The houses are tall and narrow with cartoonish tops that lean out over the street as if Dr. Seuss was the city planner.  The herringbone-brick streets are flooded with bicycles – seemingly more than cars and trams combined – careening through intersections at breakneck speeds, barely slowing down as they come within a hair’s breadth of each other.  According to one of my trusty guidebooks, the city has more canals than Venice; standing on one bridge will put multiple others within your sights.  Amsterdam also has tulips, wooden shoes, the Red Light District, and all those other things the postcards racks at Schiphol airport told you about (see drug reference above).  There’s one thing, however, that Amsterdam does NOT have:

My cousin and I, there this month for vacation, didn’t notice it right away.  What we noticed first was the posture of the cyclists, sitting cheerfully astride their Pee-Wee Herman-style bikes.  No fancy sport bikes here; everything clangs and clatters, with children riding either in baskets on the front or in seats on the back.  So I suppose we first noticed that the Dutch didn’t seemed overly concerned about brands of bikes – which makes sense considering the amount of time they’re spent parked in the rain.

But the cyclists’ posture drew our attention to their wardrobe.  In Amsterdam, there is nary a label in sight.  No Aeropostale, no Nike, no Abercrombie, and certainly no “Juicy” spelled in glittery grommets across Dutch butt cheeks.  And no “Juicy” means no sweatpants worn out and about in a non-gymnasium setting, hems dragging on the sidewalk.  If I could be so bold as to make a sweeping fashion observation of Amsterdam’s locals, it would be this:  they dress with subtle class.  Make-up is minimal, and cleavage is – well, it’s in the Red Light District framed by red curtains.  The women don’t just walk around with half their bozooms showing; nor are they shapelessly swaddled.  Everyone – men, women, children, senior citizens, all of them consumers of large quantities of carbohydrates to boot – is slim, trim, and clad in shapely sweaters, tights, jeans, scarves, dark hues and sometimes stripes, looking like they’re about to read a really smart book while eating something exotic.  No hoodies, no baseball hats, no errant “muffin tops” spilling over too-tight waistbands.  (You know the kind – where the globs of pasty flesh Poppin-Fresh right out from between the tiny tee and the low-rider jeans, constrained by a wee elastic thong stretched to its limits, ready at any moment to fling across the room and hit someone in the eye.)

“I don’t think many American men are secure enough to pull THAT off,” said my cousin, pointing to a handsome family man in slim fitted jeans and a colorful scarf.  As he hopped off his big aqua Schwinn, he scooped a lap dog out of its basket.  We almost fell into a canal ogling him – the height, the dark clingy sweater and jacket, the curly locks, the well-behaved dog… “Nope.  Too emasculating.”

The irony is that despite the lack of scantily-clad supermodels wagging their wares from billboards and bus stations, and the fact that the Dutch by and large look wholesome and freshly scrubbed, sex and drugs lurk around every corner.  It’s all neatly controlled, but it’s there nonetheless.  The souvenir shops that sell wooden shoes and knit caps also sell naked playing cards and anatomically correct salt and pepper shakers.  There really are stores that sell breeds of marijuana seeds, as plain and plentiful as there are strains of tulips in the Bloemenmarkt.   And the Red Light District really does (hold onto your hats, fellas) have women for hire, standing behind a pane of glass, in their undies, for the world to see.  It’s more than a bit alarming, and I did have to resist the urge to knock on the glass and say “Doesn’t your mother know where you are!?”

But perhaps the Dutch know something we don’t.  They’re not walking around stoned out of their gourds all day with their goods hanging out.  The streets are neat and clean.  I felt as safe (or safer) there than in any city I’ve traveled to so far.  I do wonder how I’d feel about raising my 12-year-old daughter in a place where marijuana and prostitution are legal.  Well…

1.     If she’s ever going to try dope, she’s not going to get arrested, and she can at least have very excellent coffee along with it.

For this (and the stroopwafels), I could learn to parallel park alongside a canal with no railing.