The Toddlerhood of Cool 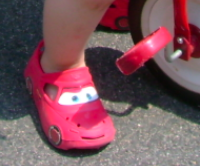 When I told my 3-year-old son that we’d be going shoe shopping, his immediate response was:

I’ll admit that, in the past, I’ve caved in to those big blue eyes staring up at me from the seat of the Target shopping cart and been coerced into buying Thomas the Tank Engine sneakers or Lightning McQueen sandals.  “But he loooooves Thomas!” I’d say to my husband upon returning home, pointing at the grinning blonde toddler stomping around the kitchen in his new kicks, holding a train in each hand as he stared at his own wobbly feet.  Surely such a display of cuteness must justify my impulse purchase.

But Spiderman?  He has never watched Spiderman, we don’t have the comic books – he might as well be asking for Walter Mondale shoes.

“Ralph* has them.  He says they’re super cool!”

“You have weird ankles,” I told him.  “We’re going to Stride Rite.”

“Do they have anything cool?” he asked, frowning skeptically at his plain black sneakers.

“Probably not.  And what’s with the ‘cool’ thing, anyway?”  Truly, this was a new development.  Superheroes, I was told by this most diminutive of experts, are cool – as are monster trucks.  He found this out from his friends at preschool, and although he was unable to define that certain quality that made them cool vs. uncool, he was able to tell me that Wolverine was the one with claws.

Arriving at Stride Rite, I scanned the display for something practical (good for playing outside but not too sneakery, tall enough to support the wacky ankles) while he searched in vain for something – anything –

“Mommy, these are all just REGULAR.”

And therein lies the rub.  It wasn’t that he, too, needed superhero shoes; it was that he needed something different – cars, stripes, seizure-inducing flashing lights – anything that would make his shoes unique.  It’s the same reason he insists on wearing a hat with a propeller on top or speaking only in “Penguin”.  (Penguins, apparently, have a vocabulary limited to words such as “bloorp bloorp”, yet possess a wide range of expressive hand signals despite the limits of their flippers.)  Even preschoolers need to make their mark on the world, and their world exists in a land of make-believe far bigger than our own.  Perhaps brand loyalty begins too young, and Spiderman shoes become Adidas pants and Abercrombie sweatshirts – but perhaps it’s more than that.  Maybe we’re pre-programmed to make our mark on the world in some unique way and to say, from the height of three feet tall, “This Is Me” – and only later become tempted to follow the crowd.

With a sigh, he agreed to try on a sensible pair of brown shoes, surprised at their inner squishiness.

“Are they comfortable?” the salesgirl asked.

“YES!” he squealed, then caught himself.  “I mean... nooo….”  Lifting his foot and turning over the shoe, I showed him where the squishiness came from: a clear rubbery plastic air bubble built into the sole, from which you could look straight through almost to his socks.  The feature was purely practical, but I could see the wheels spinning.

He decided to wear them home, where his grandmother was waiting for us.

“Look inside my shoe, Nana,” he said, trying to balance on one foot without toppling over.  “Can you see where I keep the goldfish?”