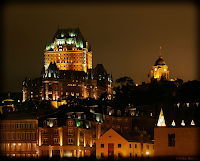 My parents were masters of the Cheap Family Vacation.  So expert were they, that my sister and I really thought there was no one else who was having as much fun as we were.  Our vacations were always to Washington DC (stayed with family) or Quebec City (cheap Canadian dollar), and we always drove (never flew) but still - we fancied ourselves well-traveled.
Except when it came to Disney World.
Everyone else on the planet, it seemed, went to Disney World.
We begged, we pleaded, we promised to be sooooo good forever and never fight with each other ever again ever if we could just go to Disney World like everyone else.
"Disney World is expensive," my mother said.  "We'd have to save up for a few years."
The kids down the street went to Disney World every year.  They'd ride on Space Mountain and get their pictures taken with Donald and Goofy and come back wearing those mouse ears with their names stitched in wobbly script on the back.  (But their father was a cop at the airport and an amateur boxer to boot, so clearly they were living the good life.)
"Sure, we can go to Disney," my father said, and for about two seconds my sister and I sucked in our breath as if this was the moment we were waiting for, although deep down we knew there'd be a catch. "But that means no more Quebec City."
My sister and I looked at each other and knew that we wouldn't even need to discuss this one to agree on a decision.  No dice.  I, for one, spent 51 unbearably long weeks every year waiting to go to Quebec City.  No six-foot-tall helium-voiced mouse was going to take it away from me now.
Quebec City has no roller coasters, no big subways, no beaches.  But it's Disney in its own way - a tiny jewel-box town where jugglers dance in the streets, painters work on miniature masterpieces at easels on the sidewalk, and musicians spontaneously break out in song wherever there's a blank patch of grass for a stage.  There's no skyline, so the Chateau Frontenac rises like a castle surrounded by the 18th century dollhouses.
The kids down the street who went to Disney World used to ask us what we did in Quebec City.  You know, since there's no Space Mountain.  Well, in Quebec City, we didn't stay in a hotel; we stayed in a little basement apartment with a bed in the kitchen and a door that opened onto the sidewalk so that when we heard concerts starting in the park, we could walk right out in our pajamas.  We ate croissants for breakfast and watched our crepes being made for dinner - huge tabletop-sized wafer-thin pancakes, filled with ice cream and folded like origami until they fit on our plates.  We played on the big cannons on the boardwalk.  We watched my father buy any combination of items at a newsstand that might add up to seventy cents just so he could say "Soixante-dix?" to the vendor.  We rode the Funiculaire, a rickety outdoor elevator, from the upper town to the lower town, each time feeling that at any minute the cords would snap and we would crash to the bottom.  We took the ferry across the St. Lawrence to Levis, just to see the view of Quebec from there - truly the cheapest fun to be had, because it was really just a commuter boat, like taking a bus, and the best part of all was that we could buy salt and vinegar potato chips on board, long before they were available in the US.
The Disney kids didn't quite get it.  You know, since there's no Space Mountain.  But Quebec wasn't a place where you even had to do things to keep busy.  The place just is, and when you're there, you are too.  It's life experience.
So I've still never been to Disney World, and neither have my kids.  Yet.  (We'll go someday, so that they don't reach adulthood with that nagging feeling that they're missing something like keys or a wallet.)  But a couple years ago, my parents took my daughter on her first trip to Quebec City, just the three of them, and they did all the same things we used to do.  She brought home a tiny glass snow globe of the Chateau Frontenac, the one gift she wanted as a souvenir.  It sits on our mantle, the jewel-box city in miniature.
If someone asked me right now to hop on a plane and choose Quebec City or Disney World, I have a pretty good idea of which one I'd pick.
Posted by Jen at 7:52 AM